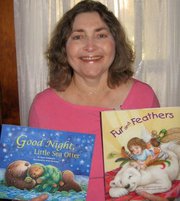 Tell us about your book(s) and illustrations.
I have written more than 30 fiction and nonfiction books for children. I have two new fiction picture books out this fall: Fur and Feathers (Sylvan Dell Publishing) and Good Night, Little Sea Otter (Star Bright Books).

Fur and Feathers, which recently won Gold in the Moonbeam Children’s Book Awards, is a fun story of creativity, friendship, and animal coverings. When whipping winds whisk the clothes off Sophia's animal friends in a dream, she shares her clothes with them. But the animals can’t walk or fly in the kid clothes, so Sophia comes up with a creative plan, thanks to her grandma's huge sewing box.

Good Night, Little Sea Otter is a soothing and fun bedtime story featuring a baby sea otter who stalls going to sleep by saying “good night” to each and every one of his ocean friends. It seems like he'll never close his eyes! But finally he settles down to sleep cuddled in his mama’s loving arms in a cradle of kelp.

The art for Good Night, Little Sea Otter is just amazing. One reviewer said: “Is this not the cutest cover you've seen on a kid's book?” The colorful inside pages show a wealth of ocean life. I do not actually know who the artist is because she used a pseudonym, Wish Williams.
How long did it take you to get this idea to where it is now?
Fur and Feathers was one of my quicker books to write. It took about a month. I wrote the book after noticing on the publisher’s website that they were looking for a story on animal wraps. Right away that topic fascinated me, so I started researching and brainstorming. After I submitted the manuscript, the publisher asked me to add two more animals, including an insect; but beyond that there were only minor revisions. I submitted this story only to Sylvan Dell Publishing, and they bought it about ten months after I sent it.

The inspiration for Good Night, Little Sea Otter came while writing a magazine article about two young girls scuba diving in a kelp forest off the coast of California. In researching the animals that the girls met, I fell in love with the sea otters. I was especially fascinated by how the mother otter wraps herself and her baby in kelp strands to keep them from drifting away during the night. I thought the otters would be perfect to star in a bedtime story!

I originally wrote the otter story in 2001 and over the years submitted it to several publishers, fine-tuning it several times in the process. Star Bright Books bought the manuscript in April, 2008. Yeahhh!!

What will kids love most about your book(s)?
Kids love the animals. I try to use telling little details about the animals’ behavior to make them come alive for the child and to make the reader care about them. In Fur and Feathers, kids also enjoy trying to come up with their own ideas of what would work for the various animals’ coats. One young reader suggested dryer lint for a bunny coat and another toothpicks for a porcupine. How creative! Kids also like the friendly, caring relationship between Sophia and the animals, and the loving relationship between Mama and Little Sea Otter.

What will parents and teachers love most about your book(s)?
Parents and teachers like that besides the fun story, the books also contain lots of science. In Fur and Feathers, kids see how each animal’s coat is different and why that is important. In Good Night, Little Sea Otter kids learn a lot about sea otter behavior and the variety of life in the ocean, and specifically the kelp forest. Parents and teachers also like the “For Creative Minds” activity section at the back of Fur and Feathers, plus the many free educational resources online: a 57-page Teacher’s Guide, reading and math quizzes, English and Spanish audio, alignment to state and national standards, etc.

What's your next project?
I have two nonfiction picture books coming out this spring. Garter Snake on Willow Creek Lane will release from Soundprints/Smithsonian Institution in April, and Star of the Sea: A Day in the Life of a Starfish, will come out from Henry Holt in May.

Although most of my books are about animals and nature, that is not always the case. My work in progress is a Civil-War-era biography similar to my book Seven Miles to Freedom: the Robert Smalls Story (Lee & Low Books 2008). The new project will spotlight an amazing but little known woman from that time in history.

Be an advocate for literacy. Thanks for your support and for stopping by.