Join in the fun as we introduce you to author Michael Scott Miller and his new detective series the Twisted Oak Amateur Detectives. The first adventure is The Phony Farkleberry. For a chance to win be sure to follow, share and leave a comment with your name and email. Offer expires 1/31/15. 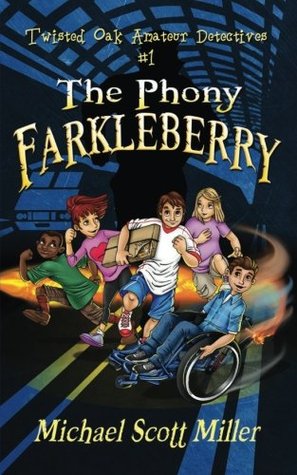 Who would have guessed that five brainy, nerdy friends would find themselves in a position to become small town detectives? Tyler, Melanie, Amanda, Tubby and Dontrelle are all up for the task.

The first adventure of this new group of detectives all starts when Tyler’s mom, who works at the Patterson Museum, decided to bring a big gala locally. The gallery will be showcasing a Thomas Farkleberry painting worth more than $230,000. The painting is on loan from the Michaud’s. Tyler invites Melanie to come along. They dress up in their fancy clothes and eat fancy food at the museum. While there, the duo overhears some shady conversation and planning of something not so good by a man and a woman at the gala. The next day it is discovered that the Farkleberry had been stolen.

It was time for the five detectives to put a plan into action. Together they crafted three phases to catch the Resnick’s, the shady couple at the museum, and expose them. The first phase was assigned to Dontrelle and Tyler. They stake out the house of the Resnick’s and Dontrelle used his computer skills to hack into their network and dig for information while Tyler played look-out. Phase two is Tubby spying from a tree and Dontrelle as the lookout. Phase three happened after three days and it was up to Amanda and Melaine to get into the house and have a look around. They did this by telling the Resnick’s they were selling candy and then needed to use the bathroom.

Once the three phases were completed the detectives split teams and learned about forgeries at the Patterson Museum and the National Gallery. They discovered that the stolen painting could have been an inside job and perhaps the Resnick’s hired someone to steal the painting for them. The detective team must figure out if the Resnick’s are guilty, was the painting a forgery, expose the culprits and get the painting back to the gallery for Tyler’s mom. The Twisted Oak Amateur Detective team have their first case and it’s a race to solve the mystery.

Author Michael Scott Miller has created an engaging mystery series that boys and girls will love. This fun and fast paced middle grade read has likeable characters that are smart and easy to relate to. The story line is fun and readers can attempt to figure out the clues and solve the mystery themselves. Teachers can use this book as a read-along in class and discuss the events as they unfold. Parents will appreciate the series that will get boys who don’t like to read involved.