The Clothesline Code by Janet Halfmann 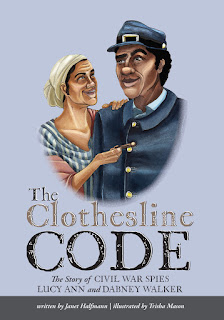 Wars have spies. During the Civil War there were spies that were military personnel and some that were not. The Clothesline Code shares the true story of Dabney and Lucy Ann Walker, two people who helped win the war.

Dabney Walker was assigned to the new intelligence unit at the age of fifty-two. He was inspired by the use of flags as symbols for code using various combinations. During the war, these flags were used for communicating across long distances. Lucy Ann, Dabney’s wife, worked in the camp as the laundress. She wanted to help defeat General Robert E. Lee’s troop. Together, the couple come up with an idea to use the clothing on the clotheslines as a way to defeat General Lee.

There would be great danger for Lucy Ann going to the other side to spy, but the couple had faced greater danger escaping slavery. Their task was to create a unique laundry code for each unit. Certain colors of shirts would notify Dabney as to how close the troops were. With Lucy Ann in harm’s way, there was worry that she could be caught and what would happen to her if she did get caught. The couple’s idea was providing precise and timely information, that is until Dabney suddenly stopped receiving information from Lucy Ann. Would the mission be over, and they lose? What happened to Lucy Ann?

Author Janet Halfmann has shared another great story from our history. Young readers will enjoy colorful illustrations and a story that is a fast but interesting read. Parents and teachers can use this guide to teach about the Civil War, heroes and even specific events during before and after slavery. 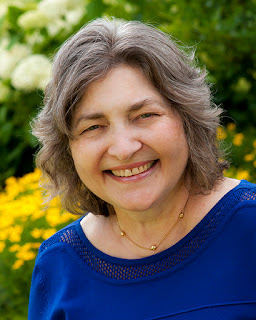 Janet Halfmann is an award-winning children's author who strives to make her books come alive for young readers and listeners. Many of her picture books are about animals and nature. She also writes picture book biographies about little-known people of achievement.

Recent titles by Janet include The Clothesline Code: The Story of Civil War Spies Lucy Ann and Dabney Walker; A Bobby-Dazzler of a Pouch!; The Story of Civil War Hero Robert Smalls (Chapter Book for Grades 3-7); Midnight Teacher: Lilly Ann Granderson and Her Secret School; Grandma Is a Slowpoke; Animal Teachers; Eggs 1, 2, 3: Who Will the Babies Be?; Home in the Cave; Star of the Sea; Good Night, Little Sea Otter; Fur and Feathers; Little Skink's Tail; and Seven Miles to Freedom: The Robert Smalls Story. Janet has written more than forty fiction and nonfiction books for children.

Before becoming a children's author, Janet was a daily newspaper reporter, children's magazine editor, and a creator of coloring and activity books for Golden Books. She is the mother of four and the grandmother of six. When Janet isn't writing, she enjoys gardening, exploring nature, visiting living history museums, and spending time with her family. She grew up on a farm in Michigan and now lives in South Milwaukee, WI.

The book is releasing from Brandylane Publishers and the illustrator is Trisha Mason. The book is distributed by Ingram. It is available from bookstores and online booksellers. You can find more info about the book on my website: https://www.janethalfmannauthor.com/the-clothesline-code