Ensnared In The Wolf's Lair by Ann Bausum 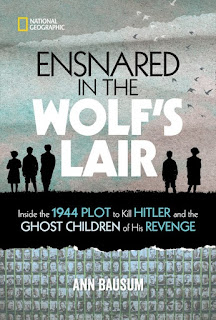 Title: Ensnared In The Wolf’s Lair


From the diary of Christa von Hofacker her recollection of her father and Hitler’s rise to power is what this book shares. At the young age of twelve she writers about her experiences, during World War II.

History shows us that Hitler was a brutal man which is how he maintained his authority. Within Hitler’s organization were some who felt he shouldn’t have this power and secretly met to stop him. The lead on this coup to devise a plan was Clause von Stauffenberg. They disquised their activity by pretending to update a military mssion known as Valkyrie. It was difficult for them to reach Hitler in his Wolf’s Lair, but several opportunities did present themselves. With complications and confusion that undercut their effectiveness, they lost support from the general public.

Author Ann Bausum traveled to visit with Christa and other survivors to get their stories. We’ve seen the movie and documentary and read many stories of the battle during World War II. This book presents details and photos of the people, and soldiers during the Hitler regime. Parents and teachers can shre this book with their young history enthusiasts.